The Southeast Asian state of Myanmar, despite pressure from Washington, has decided to work with Chinese telecom company Huawei to develop its national 5G communication network.

The move by Myanmar is just one among many by the entire region to build ties with China despite extensive efforts by the US and some Western European nations to encircle and isolate Beijing economically, politically and even militarily.

If ever there was an indicator of just how real the delcine of US primacy was particularly in Asia, it is this steady march of joint progress being made between the nations of Asia and China.

US State Department-funded media platform Voice of America (VOA) in its article deceptively titled, “Myanmar to Keep Huawei Despite Security Concerns,” would complain:

The decision comes despite national security concerns about Huawei by the United States and some other countries.

Huawei Technologies is currently working on building the next generation in wireless technology in countries around the world. The development of 5G has caused tensions between the United States and China. U.S. officials have long suspected the Chinese government could use Huawei network equipment to help carry out spying activities. Huawei has rejected such accusations.

It is only well into the third paragraph that the VOA article begins to admit “security concerns” regarding Huawei are in reality simply accusations made up by the United States and based on nothing resembling evidence or documented impropriety.

VOA finally admits that beyond alleged concerns regarding “national security,” the US has targeted Huawei because it conflicts with US “foreign policy interests.”

In other words, Huawei is outcompeting US corporations abroad and rather than look inward at the shortcomings of American industry and fixing them, the US is instead attacking Huawei politically through accusations and economically through sanctions.

Spot the Difference: Real Spying vs. Accusations of Spying

For those wondering what genuine concerns over security should be based on, the BBC in its 2014 article titled, “Edward Snowden: Leaks that exposed US spy programme,” covers irrefutable, documented evidence of the US government abusing its monopoly over telecommunication networks to carry out unprecedented spying at home and abroad.

The scandal broke in early June 2013 when the Guardian newspaper reported that the US National Security Agency (NSA) was collecting the telephone records of tens of millions of Americans.

The paper published the secret court order directing telecommunications company Verizon to hand over all its telephone data to the NSA on an “ongoing daily basis”.

That report was followed by revelations in both the Washington Post and Guardian that the NSA tapped directly into the servers of nine internet firms, including Facebook, Google, Microsoft and Yahoo, to track online communication in a surveillance programme known as Prism.

Of course, the revelations made public by Edward Snowden’s whistleblowing went far deeper than Prism, involving invasive US spying efforts carried out with the help of not only telecommunication companies, but also software makers and even US-based hardware manufacturers.

MIT Technology Review in its article, “NSA’s Own Hardware Backdoors May Still Be a “Problem from Hell”,” would reveal:

Revelations that the NSA has compromised hardware for surveillance highlights the vulnerability of computer systems to such attacks.

In 2011, General Michael Hayden, who had earlier been director of both the National Security Agency and the Central Intelligence Agency, described the idea of computer hardware with hidden “backdoors” planted by an enemy as “the problem from hell.” This month, news reports based on leaked documents said that the NSA itself has used that tactic, working with U.S. companies to insert secret backdoors into chips and other hardware to aid its surveillance efforts.

The US is thus guilty in reality of everything it is baselessly accusing Huawei of and serves as another example of the sort of “American exceptionalism” that has poisoned the globe’s perception of America.

Myanmar’s continued trajectory into China’s economic and political orbit is particularly embarrassing for the United States.

The current government of Myanmar is headed by State Counsellor Aung San Suu Kyi and her National League for Democracy political party. Suu Kyi and and her party are virtual creations of the US and British governments benefiting from decades of political support and untold millions in financial aid. Suu Kyi also serves as the figurehead of an extensive network of fronts funded out of Washington and London posing as nongovernmental organisations.

These include groups that sabotage joint Myanmar-China infrastructure projects under the guise of upholding “human rights” or addressing “environmental concerns.” 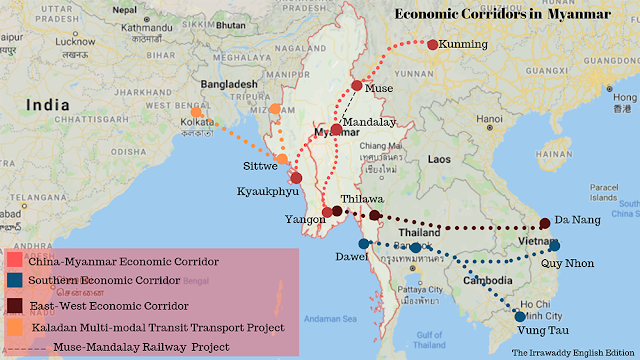 Despite the artificial nature of Suu Kyi’s political rise, or perhaps because of it, her government is subject to much more fundamental forces than US meddling and rhetoric. Despite the finely honed tools of political interference Washington wields, Myanmar is still driven primarily by basic economic forces, as are all nations are.

While Washington has invested immense amounts of time, money and energy in manipulating the political landscape of foreign nations, it has severely neglected the basic fundamentals of any nation’s power including its own.

With no alternative to China’s manufacturing might, its ability to build massive continental-spanning infrastructure projects and its offer to lift all of Asia up with it as it ascends upon the global stage, even Washington’s most carefully crafted proxies end up succumbing to what is simply a better offer made by Beijing minus the constrictive conditions that come with any partnership made with Washington.

The story of the United States’ decline is one of neglected fundamentals. Until the US addresses these basic fundamentals, no amount of political meddling or military aggression can compensate for this decline.

Whether it is China’s Huawei offering better telecommunication solutions to Southeast Asia, or cheaper and more effective military hardware or a more appealing regional architecture that recognises the primacy of national sovereignty, until the US is able to offer a similar or better offer, it will continue to lose even in places like Myanmar where its investments and meddling have been most extensive.

One final dimension to this latest setback in Washington’s war on Huawei is that Huawei’s growing fortunes in the region regarding 5G technology will provide it with the time and clout needed to overcome some of Washington’s most damaging tactics including cutting Huawei off from Google’s Android operating system used by smartphones around the world.

Huawei is already launching smartphones using its own opensource operating system and as time goes by, it will likely begin displacing Google’s previously undisputed market share in Asia first, and globally next.

Huawei may have been outcompeting US corporations, but it was America’s own decision to play dirty that ultimately backfired and now threatens to displace the few remaining areas of expertise the US excelled in.

The US will continue firing shots at China, and in response to Myanmar’s steady drift into Beijing’s orbit, the US will likely turn up its campaign of sowing instability within Myanmar itself.

Watching the US media turn on Aung San Suu Kyi whom they themselves for years helped christen as the patron saint of democracy and human rights on a level of reverence nearing that of that other notorious CIA creation, the Dalia Lama, is a warning to all who are eager servants of Western special interests. Suu Kyi’s future always was one in which she would be required by Washington to work against not only Myanmar’s best interests but her own as well.

China’s role in mediating disputes along its border with Myanmar between the nation’s central government and separatist groups in an attempt to preserve Myanmar’s national unity is also much in Myanmar’s best interests.

It is an approach to resolving the conflicts contrasting greatly with the US’ tactics of defending separatist demands and perpetuating the destructive ethnic divisions purposefully cultivated when Myanmar was the British colony of Burma to keep the nation divided, weakened and susceptible to Western coercion.

Nothing the US has offered Myanmar comes even remotely close to fulfilling the nation and its people’s genuine needs or best interests and it is no wonder why Myanmar has pivoted toward Beijing despite the current government’s deep, decades-long ties to Washington.

The US will continue its current tactics, but this Eastward trend will continue for Myanmar and across the rest of Southeast Asia. The only question is how much damage the US will cause before the region fully escapes out from under the shadow of European colonisation and America’s self-appointed task of trying to reassert Western primacy over the region.