With US-backed militants having already reached the full extent of their gains on the battlefield and now facing incremental but inevitable defeat – the US appeared to be out of time and out of options.

Then suddenly – as if on cue – Abu Bakr al-Baghdadi – alleged leader of the so-called “Islamic State in Iraq and Syria” (ISIS) was resurrected after US claims he had died years early, and provided the US with the perfect pretext to militarily intervene in Syria anyway.

Abu Bakr al-Baghdadi, the leader of Islamist militant group Isis, has called on Muslims to obey him, in his first video sermon.

Baghdadi has been appointed caliph by the jihadist group, which has seized large swathes of Iraq and Syria.

The sudden wave of violence unleashed by ISIS across Iraq and Syria was on such a scale that only state sponsorship could have accounted for it.

In fact – the US Defense Intelligence Agency (DIA) as early as 2012 had even noted (PDF) a Western and Persian Gulf-led conspiracy to create what it called at the time a “Salafist” [Islamic] “principality” [State] precisely in eastern Syria where ISIS would eventually find itself based.

The goal had been to further isolate the Syrian government in aid of Washington’s ultimate goal of overthrowing Damascus. When growing numbers of extremists failed to do this, the US then used the presence of ISIS as a pretext for a revised version of the direct military intervention Russia had thwarted just a year earlier.

For one year the US posed as fighting ISIS while simultaneously seizing Syria’s oil fields and building an army of militants it had hoped to use to both push ISIS into Syrian government-held territory, and with which to fight the Syrian government itself.

By 2015, Russia began its own military intervention. It immediately targeted ISIS supply lines leading out of NATO-member Turkey – something the US has failed to do up to and including today, isolating the terrorist group within Syrian territory before Russian air power along with Syrian, Iranian, and Hezbollah ground forces encircled and eliminated them along with Al Nusra and other extremist groups everywhere west of the Euphrates River.

On the American-occupied side of the Euphrates, ISIS persisted until just this year and at times was even protected from pursuing Syrian and Russian forces by a US-declared exclusion zone.

It is now clear US efforts to overthrow the Syrian government have failed. It is also clear that Washington’s pretext for illegally occupying Syrian territory is no longer politically tenable.

Just as America’s presence in Syria was becoming increasingly awkward and unsustainable, al-Baghdadi has again emerged – just in time – to grant the US victory in eastern Syria but to also remind the global public that ISIS is still an enduring threat that will require America’s continued presence in the region. 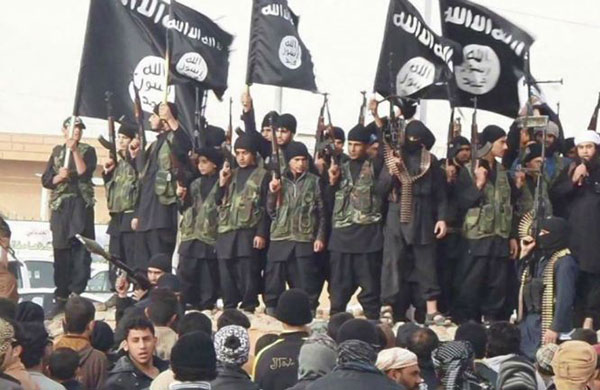 The US response to al-Baghdadi’s reemergence was telling, even complimentary. An AFP/New York Times article titled, “ISIS releases first videotape of Baghdadi in five years, US vows to track down surviving leaders of militant group,” would report:

The United States vowed on Monday (April 29) that it would track down and defeat surviving leaders of the Islamic State in Iraq and Syria (ISIS) movement after its elusive supremo Abu Bakr al-Baghdadi appeared to speak in a newly released videotape.

The US-led coalition against the group will fight across the world to “ensure an enduring defeat of these terrorists and that any leaders who remain are delivered the justice that they deserve”, a State Department spokesman said.

US hegemony requires the US military to maintain a presence around the globe – which in turn requires a perpetual pretext to do so. Just as the US deliberately created ISIS to serve as a pretext for illegally occupying Syrian territory remain there indefinitely – it has and will continue to use ISIS’ convenient expansion worldwide to justify a continued, global US military presence worldwide as well.

Students of history would be hard pressed to find similar examples of a military or political leader like al-Baghdadi who openly, even eagerly conceded defeat and grant a supposed adversary a massive political victory. So convenient and artificial is al-Baghdadi’s most recent reappearance and all of his alleged activities in the past that many around the globe are questioning the veracity of the video and of al-Baghdadi himself.

Considering America’s own Defense Intelligence Agency has all but admitted the US deliberately created ISIS in the first place – it takes no stretch of the imagination to conclude they created al-Baghdadi as well.

The summation of ISIS’ fighting capacity is drawn from its admitted state sponsors – both Saudi Arabia and Qatar – as admitted by US politicians themselves, the UK Independent would report.

Riyadh, Doha, and in turn, those underwriting both regimes in Washington – are the true “leaders” of ISIS – arming, funding, and directing the terrorist organization – with al-Baghdadi a mere figurehead who emerges when the needs of Western foreign policy and propaganda require.

If the US could create a villain to consistently serve Washington’s interests both in Syria and around the globe, they would have difficulty creating one more ideal than Abu Bakr al-Baghdadi.